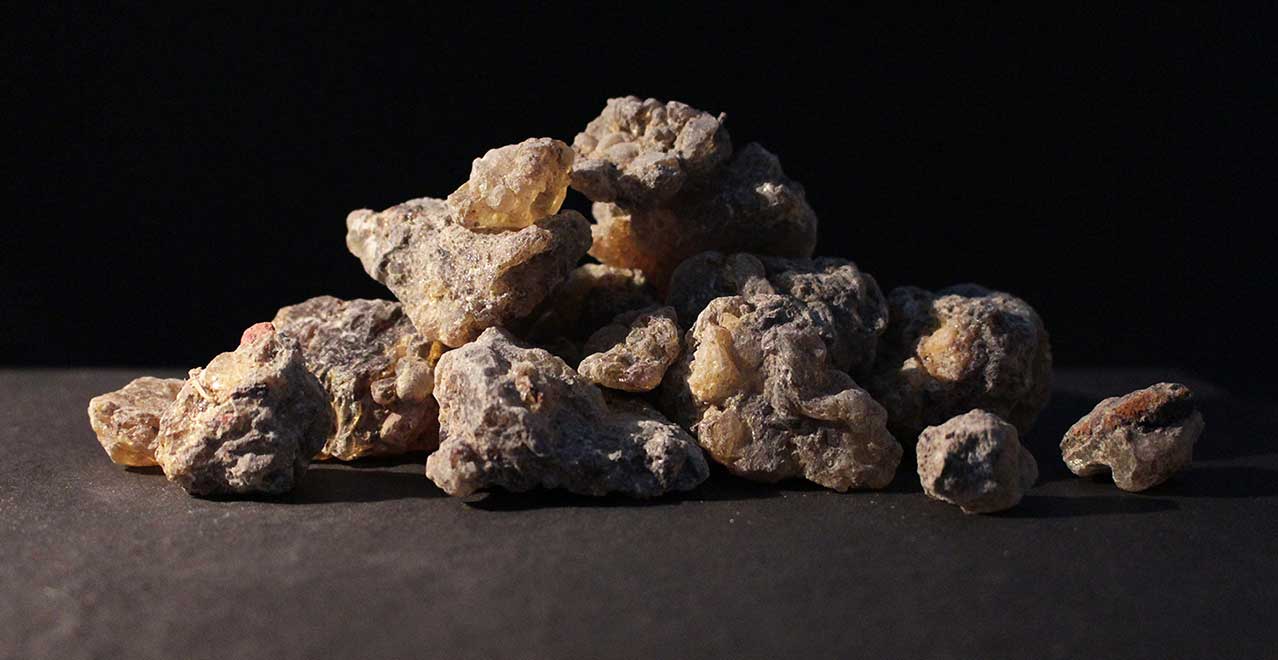 Copal is a very broad collective term for in part sub-fossilized gums of diverse botanical backgrounds. Sub-fossilized gums mark the transition between fresh, young gum and million years old, hard amber. The term Copal is used in part for young, man-harvested gum but also for fossilized tree resin that is hundreds or thousands of years old.

The word Copal derives from the Aztec word for resin in the Nahuatl language: “copalli”. There are mainly 3 varieties of Copal: American Copal, African Copal and Kauri Copal.

American Copal, also called Mexican Copal, mainly comes from the tree genera Protium, Bursera and Hymenaea. Inside these genera, Copal originates from a wide variety of species. The quality and the specific name of the Copal are dependent on the tree species, the harvest technique and the region of origin among other things. Examples of well-established names are Copal Negro, Copal Bianco and Copal Oro among many others. This leads to a very complicated system of nomenclature for American Copal gums. Aided by modern analytical methods such as the High Precision Liquid Chromatography (HPLC) or the Gas Chromatography (GC), attempts are made to offer a clear scientific classification scheme for American Copal.

Kauri Copal comes mainly from New Zealand and is the sub-fossilized gum of the Agathis australis and (to an extent) Agathis ovata Kauri trees. These trees are endemic to northern New Zealand. They can reach heights between 30 and 50 meters. Kauri tree forests produce huge quantities of gum and resin that seeps into the forest floor. Protected by the ground above, it fossilizes for thousands of years and becomes Kauri Copal. With the arrival of European settlers, this Copal started to be extracted for industrial purposes and became New Zealand’s main export product in the first phases of colonization. In Maori culture Kauri Copal is used as a kind of chewing gum, in the creation of torches and in the production of the ink used for the memorable Maori face tattoos.

The raw material Copal offers similar industrial fields of application as Dammar gum. Due to the presence of essential oils in the gum, Copal is used in the traditional religious and therapeutical rites of its countries of origin. As a natural resin, it is a component for high end varnishes and colors. Since some Copal nodules present organic inclusions, for example insects or spiders, this type of nodules are sold as amber imitation or counterfeit. As a natural polymer, Copal has potential applications in the pharmacological industry, for the creation of matrices for controlled drug release in pills.

Willy Benecke has a long standing history as supplier of the raw material Copal gum. We purchase our Copal from different suppliers, to ensure that the demands of our customers are met, to ensure highest quality at all times and to guarantee short delivery times.

We offer Copal gum for the following industrial applications: